… choose you this day whom ye will serve… but as for me and my house, we will serve the LORD. Joshua 24:15 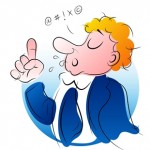 Let’s take how we choose to serve God down to our life level – like movies. Years ago, Leland and I wouldn’t watch a F-Word cursing movie. We even purchased the TVGuardian (old video tape version back then) that blanks out curse words.

Slowly, little things began to slip in. “Oh! The movie is SO good. Only a few F-bombs slipped in but I want to watch the ending.”  Pretty soon, we became desensitized to almost all of it.

You pay attention or listen to something long enough, you eventually don’t hear it any longer. You begin to tune it out. Unfortunately, also during that time we let God’s name be taken in vain slip by. It wasn’t as prevalent in most of our movies as the F-bomb, but it was there.

Then late last year (2020) God began to convict Leland about the F-bombs movies. There were not that many (we are more addicted to Pixar), but there were enough. He pointed out that the number of F-bomb incidents we were ignoring were beginning to increase.

Sure, the movies were not totally overtaken with F-bombs like some are. But. He pointed out that if you listen to those curse words long enough, it will soon come out of your mouth. And it will affect your faith.

Leland began to pay attention again. OH MY GOSH. You would not believe how many movies we thought of as clean that actually had a lot F-bombs in them. Much more than we used to consider acceptable – 1 to 2 maximum.

We had totally begun ignoring them. Even WORSE, we began not hearing “God da*n it” (which is essentially asking God to damn something, which we know is BAD) or “JeeZus Christ” except used as a curse word.

We had a choice to make. Choose to obey the conviction to get rid of our DVD’s with many curse words. Choose to quit watching streaming movies that use those curse words (especially GD). Choose to start paying attention.

Sure at first it seemed hard – we discovered some of our favorite action adventure movies had more than 2 F-bombs. But away they went. I think we’re beginning to get rid of the 2 count, also – baby steps. The important thing is we chose to obey God – and it feels so good.

Click here to check out a few ways God gave me to use as a standard for my choices – movies, books, streaming, television, etc.

2 thoughts on “Choose Today Who You Will Serve”