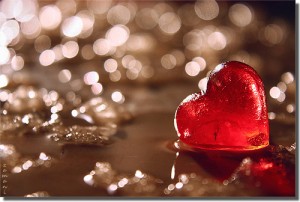 The other day I was thinking about how amazing my life has been since I sold out completely to God. I’ve experienced amazing miracles and things I call supernatural but I’m pretty sure God calls normal (in Him).

Today I am going to give you an example of one of the ways I heard God speak to me.

Over 25 years ago, I met Leland at work. We worked at the local nuclear plant and while I was a permanent employee, he was a contract one – someone who came and went. I had updated his resume for him during one of his “there” times but that was the extent of my knowledge of him.

This story is after we re-met another time he’d come in to do some work, We had gone out a couple of times, talked on the phone numerous times (hours, anyone?), and both knew God was up to something. One evening after about 5 weeks with him, I was leaving the plant. I “heard” God say (inside like a thought not my own), “Go buy a card that says, ‘I love you.”  I knew it wasn’t my thought and not just because I already knew there was no way I’d ever tell a guy I loved him first.

No, I knew it was God because I’d gotten to know Him and His “voice” through years of hearing Him. I remember at the time I replied, “Umm, but God, I am not going to tell him I love him first. You know this.”

His only reply was, “Go buy the card. I will tell you when to give it to him.”

So, I went way out of my way to go to Halmark to find a perfect card to tell this guy I loved him. I figured it would be a long time before I gave it to him.

That evening, Leland came over to visit me. I was sitting in a chair in the living room, reading. He walked into the house after knocking on the door that opened into the living room. He came straight to me, got down on his knee before me in the chair, opened his mouth and said, “Will you marry me?”

I can’t describe to you the shock that came over his face after he said that. It expressed even more shocked when I replied, “Yes.”

He said, “Really? You will?”  His voice was full of disbelief.  (He told me later he had no idea that proposal was going to come out of his mouth at that time!)

I heard inside me, “Now you give him the card” – so I said to Leland, “Hold on a minute, I have something to show you.” He was confused. Here he put his heart on the line and was freaking out about what he asked, and I leave the room??

I brought the card back into the living room and told him the story behind it – that God had told me to pick it up THAT day.

When he saw the card, he was as amazed as I was that God had prepared us both for that moment. We both actually needed the confirmation that God was in this and my obedience had helped that moment. 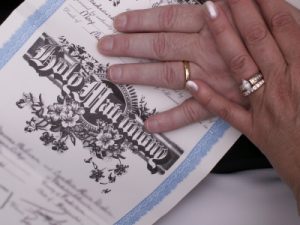 Seven weeks to the day we met in my office, we were in church setting up our lives to march forth – on March 4th – to start a new faith adventure in God, together.

God loved us both so much, He prompted me to go get a card to tell this amazing man that I loved him. And really did want to marry him. And thought he was “all that”!

Spend time with God – praying, worshiping Him, singing to Him, reading His Word (Bible), learning Who He is. Ask Him to help you learn to hear His “voice” clearly.

Some time I’ll tell you how He taught me to be more sensitive to hearing and obeying His voice – and it saved my life!

2 thoughts on “His I Love You Card”