Skip to content
— All Posts, God's Love, Gratitude, The Blessing of God — 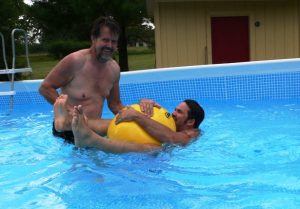 Leland was an incredible father – but he really didn’t start out that way. He had to learn how to be a godly father. When you don’t have a good (or any) role model you don’t really know how to function as a father. It’s a black hole. A total lack of knowledge.

But he learned. How? By spending time in the Word no matter where he was (here he’s on vacation). By learning the way a REAL father was supposed to be. God taught him. God also used my dad, Wayne Cook, to show him. My dad was a real blessing to Leland. They became best friends. This, in turn, helped Leland and Josh become best friends.

He had NO concept of a father’s love. He never experienced it in his life. He had to learn from God that he was loved, unconditionally and totally. He (MOST VITAL) also learned to forgive the past and everyone in it, including his own father’s lack (and who died at 40 when Leland was young).

Once he got that down in his Spirit, he began to understand a Father’s love and a father’s love. He began to apply what he learned from his Father (and mine) and became the most amazing dad.

Josh was also blessed because my father was a huge part of his life. Leland often said Wayne was his  mentor. Yes, Josh learned about work ethic, even taking the trash out, even if it’s raining.

Even if you didn’t have the good influence of a father – or even one at all – or several because there were multiple marriages – or boyfriends – or abuse or ??.  I can’t think of all the different ways someone can miss out on a godly influence in the form of a father.

The important thing is, like Leland, you do have a Father. He loves you. He will always love you. He believes in you, Supports you. Guides you through this life. Wants the best for you.

If you don’t know Him, He is just a “call” away – just talk to Him. Just tell Him you want Him to be your Father. See right sidebar

If you do know Him but never thought of Him as YOUR father – ditto – call on Him! Tell Him everything. Talk to Him about anything you want to. He is there and He is listening – just like a dad.