Leland and I have been studying and applying things in the Bible. One thing is angels, Holy Spirit, and believing things of the supernatural.

So last week, we had to move motel rooms because heavy rain came in under the wall and flooded the carpet. Squishy walking through it. They just opened the door between our former room and where we are now, for us to move.

I set that up for a reason.

First, about a month ago I lost my blue hair tie. Since everything is in storage I was frustrated because I’m pretty sure it was vacuumed up by the room cleaners. I didn’t want to buy another batch since I have SEVERAL. But this means I wasn’t able to put my hair in a ponytail, out of my face.

Luckily, I found that I had an extra one (a sort of stretched out pink one) in my makeup bag. I still looked around the floor, bedside nightstand, behind the nightstand, just kind of missing it. Not because I needed it but it frustrated me that it disappeared like that. I even said, “Man, I wish I could find that blue hair tie.”

So my point is this: In the former room, I had a bag of medical ointments. They are in a clear zippered baggie, and I’d used the tubes in it a few times over that month after I lost my blue hair tie. It is obvious what’s in it – 4 battered tubes of ointment: 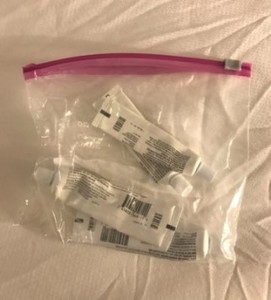 The morning they wanted us to change rooms so they could dry out the carpet, we just dragged things from one room to the other rather than packing.  I went into the bathroom, was grabbing up my makeup products, etc., and picked up that baggie to carry next door.

This is what was in the bag – this is a reenactment picture but this is exactly what I saw: 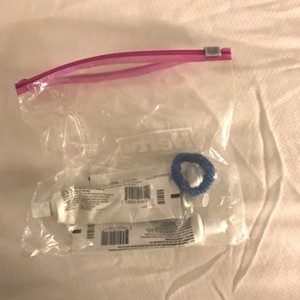 I stood there gaping at the blue hair tie in the baggie. Even neater, this hair tie wasn’t stretched out – it looked new. It may not have been but who knows? I have no idea where it came from. Well…

I went into the new room and told Leland what I’d found. We both just stood there, staring at the blue hair tie in a clear baggie – a tie that hadn’t been there the evening before. Not only that but I would NEVER had put a hair tie in the meds baggie.

It is because my Father loves me so much and knows me very well. Because that blue hair tie shouldn’t have disappeared in the first place (it was in a safe place on bedside nightstand before it disappeared).

And sure, it may not seem like a big deal – EXCEPT that is how much God loves us – even the smallest details are important to Him. These little supernatural things happen a lot in my life – but every single time, it shocks me how much God loves me. I love how He loves me.

It also shows that nothing really is impossible with God – even blue hair ties.

1 thought on “You Explain It”