Today I am going to recommend a book for those of you who want to know more about supernatural protection. God has made provision for us, His people, to be supernaturally protected no matter what is going on in the world.

I also ask that you pray for those who are both standing up for what is right and for what is righteous in this election. That may be a dangerous decision to make, but they are covered in our prayers. They are protected by the Angels and The Blood. No murders, no assassinations’, no harm. 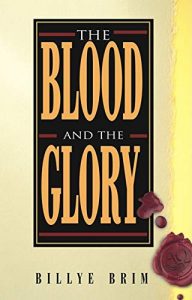 Some of us have learned what it means to “Plead the Blood” or verbally “draw a line” for protection. Some don’t have a clue and to them, saying that we can use “the Blood of Jesus” for protection sounds creepy. It’s not.

If you think about it, Jesus died on the cross and shed His Blood for the remission of sin (Matthew 26:28). That shed Blood defeated satan once and for all. That Blood represents his defeat – therefore, if that shed Blood defeated our enemy, it stands to reason WE can use that same Blood (figuratively) to maintain his defeat. We use it by reminding ourselves, God, the Angels and our enemy that that enemy is defeated.

This world we live in can be very dangerous. God set up protection for our benefit and all we have to do is use it to keep ourselves and loved ones protected. The one thing I love about this book I am recommending by Billye Brim, The Blood and The Glory, is that she includes some wonderful miracle testimonies.

I will leave you with one of those stories to give you an idea what this book means as a tool for your protection. Anyone concerned about having supernatural protection over themselves, loved ones, others, I HIGHLY recommend this book so you can understand the importance of utilizing this power tool God has given us.

A minister and his wife, named Stevens, were conducting meetings in Canada in a large church. They had left their children at home…

Because of the success of the meetings, the devil became infuriated and began to torment Brother Stevens with the thought that he was going to kill the Stevens’ children. Brother Stevens said, “Devil, you’re a liar! You cannot kill my children.” To this, the devil seemed to say, “Oh, yes, I can, for I have put rabies upon the foxes in the woods adjoining your property.”

Immediately, Brother Stevens remembered the reports of friends who had seen foxes roaming on his land before he’d left Tennessee. In simple childlike faith, Brother Stevens gathered together three other believers. Together they agreed in prayer, and by faith they drew a blood line of protection around the Stevens’ property.

A week later, Brother Stevens received a letter from his brother back in Tennessee. He said, “Today I was out walking. I walked around the edge of your property. Lying on the boundary of your land I found five dead foxes. We had the heads examined and found they were all rabid.” The foxes had dropped dead when they tried to cross the Blood line!1